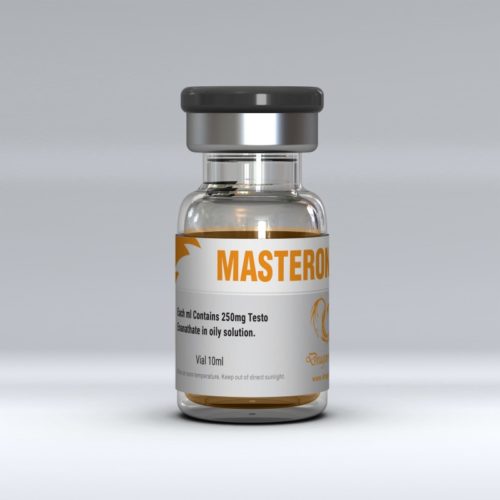 Masteron 100 from Dragon Pharma is used in sports pharmacology to increase athletic performance and a set of muscle mass, especially when is undesirable gain weight. This is possible thanks to a fat-burning effect of Masteron 100, which also allows you to use it with success for drying cycles.

Masteron 100‘s active ingredient is Drostanolone Propionate. This Drostanolone ester has shorter half-life compared to Enanthate form. This does not mean that Masteron 100 is ineffective, injections just have to be made a bit more often.

Masteron 100 active substance was synthesized from dihydrotestosterone. The resulting Drostanolone has more sustainable anabolic force and metabolism in humans. Drostanolone propionate is produced by a straightforward modification of Drostanolone broadcast using propionic (carboxylic acid). This allows to extend the effects of the drug on body (in this case – two days after injection).

It should also be noted that a low Drostanolone rollback phenomenon is not only due to dryness and density of muscle recruited, but also because of its property to inhibit catabolic reactions. In addition, the expected characteristics can be increased by properly constituted training, diet and buying peptides, fat burners, dietary supplements and vitamin/mineral supplements.

A solo Masteron 100 cycle with take mostly athletes who need to raise power characteristics, endurance, improve the physique, but it is not desirable to leave the current weight class. Masteron makes this possible, as to gain muscle mass is balanced due to weight loss by burning fat tissue.

As evidenced in the Masteron 100 reviews, it can be taked by both men and women. If you follow the guidelines listed below, the athletes will have not only a good result, but also minimized side effects risks.

As a rule, combined cycles are used to enhance the result of anabolic or spreading its effects. Masteron 100 is added to the combined cycles also because it can reduce the risk of other anabolic’s side effects due to its inherent ability to reduce estrogen.

In order to gain high-quality dense muscle without excess water, along with Masteron 100 you can buy Nandrolone Decanoate (Deca 300, Deca 500) or Boldenone Undecylenate (EQ 300, EQ 500).

Muscle growth with low risk of occurrence of side-effects will provide a combination of Masteron 100 with Testosterone Propionate (Propionat 100). But with long duration of the cycle will be necessary to supplement it with Gonadotropins to restore testosterone production.

More experienced athletes, in the application of sports pharmacology, can try a drying cycle with a set of muscles. It lasts from 6 to 10 weeks and consists of Testosterone Propionate – 150 mg injections every second day, Trenbolone Acetate (Trenbolone 100) – 50 mg daily, Drostanolone Propionate – as testosterone, 150 mg every other day. Winstrol intake should be starting from the fourth week of the cycle and must be received at 50 mg every day.

Statistically on Masteron 100 reviews say that the highest commendable is the quality of obtained muscle (88%). For compliance with the resulting effect of the claimed herein may be charged 87% of those who have used Masteron 100. On side effects complained only 18% of the athletes, which certainly speaks in its favor. In addition, without significance and the fact that injections take place without pain.

Where to Buy Masteron 100 Online?