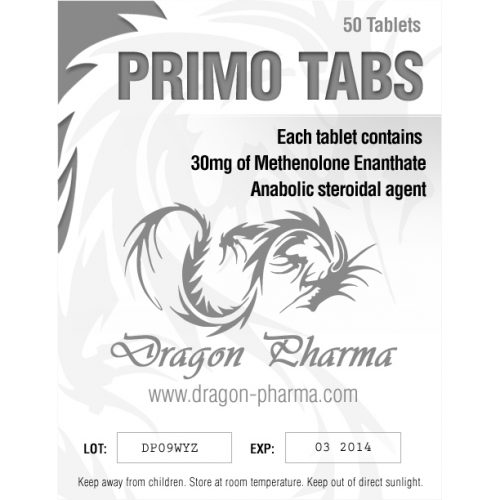 Unlike injectable methenolone, oral version of the drug can be considered practically useless. The fact that Methenolone Acetate is not alkylated by 17-? steroid, therefore, it is a subject to the active destruction of the liver. To increase the bioavailability of the drug, it was introduced methyl group in position 1, but in practice it has little avail. The bioavailability of oral methenolone is very low (less than 20%, and on a number of data even a half lower) in order to achieve a more or less pronounced effect daily dose should not be less than 100-150 mg (some experts suggest that even 200-300mg as it seems closer to the truth). Given the very high price of the drug and a low efficiency even at aforesaid doses, it can hardly be expected to be widespread.

Currently, Primo Tabs is almost out of use in power sports – not in bodybuilding or powerlifting for use it can not be recommended to men. At the same time Primo Tabs can be considered a good “female” drug.

None at any dosage.

More or less significant effect can be expected only at doses exceeding 200 mg per day of Primo Tabs. Taking the drug should be throughout the day in small portions – it may also slightly increase its bioavailability.

Combination with other drugs
Primo Tabs is used solely during the period of “drying”, it is best to combine it with the reception of drugs such as Masteron 100, Winstrol Tablets or Halotestin.

Primo Tabs can be used by women without any restrictions. Even dosages may be compared with a “male”.